When women support each other, incredible things happen…

Every month we are going to bring to you a strongMOM of the month and showcase their awesomeness!! For November, we have no other than Mrs. RuthAnne Wyble! Get to know RuthAnne and her strongMOM story at Strongside!

“The one who falls and gets back up is so much stronger than the one who never fell.”  When I found this quote, it made me immediately think of our next strongMOM – meet Ruth Ann.  She is a fighter!  She refuses to give up!  She is kind, encouraging, incredibly resilient and has some wicked ink!  Her story is as unique as she is, and it is definitely worth sharing with you…

I broke my leg in January 2017 when, by accident, a barbell dropped on my leg. My ankle rolled and down I went.  The bar, which had been extended over my head landed on my shin (it sounds crazy, but this is a routine lift for me). The ironic part of it was that if I had had any weight at all on the bar, the plates would have kept the bar from hitting me. By August, the bones still had not fused back together so my ortho decided he had no choice but to put a rod in my leg.  Start to finish, it took my leg an entire YEAR to heal!  I was out of work until mid-November and didn’t go back to a full schedule until January.  During that time my leg was trying to heal, Mitchel came up with all kinds of adaptations for me so at least I could keep my upper body strong.  As we came upon The Open, Coach Alan told me about the WheelWOD site.  I was able to do all those adapted WODs so I could still “compete” in The Open with Strongside!  I had a hell of a cheering section on the Open days!  Other days, either my hubby would bring me to an afternoon class, or I was able to get rides from some of the morning ladies. The entire Strongside community gave me so much support!  Now that I am “fully healed” there are things that I still can’t do and likely won’t be able to again… I can’t jump, the jarring impact on my leg just hurts.  The leg is stable due to the rod, but the bone is still tender.  I can run!  It hurts every time I “land” on my bad leg, but the pain is tolerable, so I push through.  I’m still not a big fan of snatches.  It is a mental block for me now – even though I know that the snatch movement had nothing to with my injury from the ankle rolling. 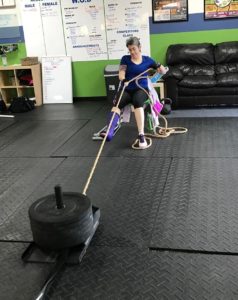 1. Your best piece of advice for any mom?

When my boys were little (and even into the teens years), when a meltdown would begin, I’d ask myself “is this the hill I want to die on?”  Sometimes it was and other times it wasn’t worth the fight.  That’s not to say that I gave into the tantrum, but I would offer a compromise or another option vs. rigidly holding the line.  In all honestly, even though the boys are grown, this same philosophy still holds true in other areas of my life, whether it is my hubby, my grandbabies, my friends or my coworkers.

2. What lights your fire outside the gym?

My two granddaughters, hands down!  I wish they were closer so I could see them more often.  Currently they are in Houston, so we make do with Skype and FaceTime.  I still hold out hope that my oldest will eventually move to Georgia to be closer to his brother. It will be a few years before my youngest will give me grandbabies as his wife starts working towards her doctorate in November (she just completed her Master’s degree!)

Aside from the grandbabies, jeeping would be my next go-to. We are members of a few jeep clubs and I LOVE to take Reveille (my jeep) out on the trails to see what she can do! Not to mention the great friends we’ve made and the beautiful places we’ve seen.

3. What’s something you’ve always wanted to do but didn’t and why?

YEARS ago, I had wanted to be a concert pianist. I taught myself to play when I was in 2nd grade and then progressed thru lessons to the point of studying under teachers at SMU (in Dallas) and eventually to an elite piano school.  I had dreams of going to either Oberlin or Julliard.  However, in my senior year of high school I became pregnant with my son and my life took a different track.  I haven’t played in years, although I am currently looking for a tuner to fix up my piano (it belonged to my great-grandmother) so I can begin playing again.  I miss it.

4. If you could choose one superpower, what would it be and why?

I really can’t think of a superpower…. it would be nice if I didn’t have AS (ankylosing spondylitis – short story, my lower spine is slowly fusing and eventually I’ll end up in a wheelchair) so that I wouldn’t have the constant, sometimes overwhelming, fatigue that comes with it.  It’s hard when we have the girls and I have to say no to something because either the pain is too much or my energy is just not there.  More times then not, I tend to “push thru” and end up paying for that later.

5. What’s your most embarrassing/funniest mom moment?

Gosh, there are so many!  My oldest was KING of the loud, all out tantrums!  I left MANY grocery carts half full in the middle of the aisle.  I would alert a bagger or other employee as I carried my screaming, flailing child out of the store so they could restock the items.  I also lost count of how many movies I walked out of for the same reason. This same child also grandly embarrassed his father and I by telling a “colorful” joke his dad had told him at the school’s “talent show,” he was in first grade.

Anything by Journey!  LOL, I don’t so much have a theme song as I do a motto: gotta wanna…. when I struggle to stay consistent whether it’s going to the gym, eating better, or completing some project I’ve started, I’ve often said “I need to find my gotta wanna”. You’ve got to want something bad enough to do whatever it takes to achieve it.

7. Looking back, is there one thing you would have done differently as a mom?

I think overall, no.  I loved my oldest enough to let him leave to live with his dad and new wife with the thought that the grass would be greener over there.  And I loved my youngest enough to tell my oldest no when he wanted to come back home.  Those few years were a real struggle for me.  My oldest had a mean streak and made life hell for his younger brother causing an incredible amount of chaos in the house.  I was devastated when he went to live with his dad, yet I also knew that having him away from his brother would allow my younger son to grow.  It was so hard to tell my oldest no when he realized the grass wasn’t greener on the other side, forcing him to accept the consequences of his decision.  Looking back, it was the best thing I could have done for both boys.  They are now incredibly close and talk almost daily.

My grandbabies! I wanted to be able to keep up with them through their toddler years and now as they are growing older.  They are truly my heart!  I never thought I could love someone more than my sons but the love that immediately hit me as I saw my first granddaughter born was so visceral and overwhelming!

9. What’s the one best thing your kids could do for you right now?

Live a good life and model Christ in all they do.  For my oldest, to be present in the girls’ lives.  He is a stay-at-home dad and he loves it.  My DIL is in school full time to get her vet tech degree.  I also love it when they call me once a week to check in.

10. If you were stranded on a deserted island, what 3 items must you have (excluding food and water)?

My hubby, my music and my kindle 🙂

**Start Today With A Strongside GROUPON For 30 Days!** 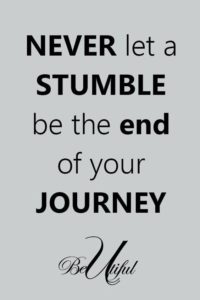